For several years now, the apparent lingerie trend has been increasingly present – whether on the catwalks but also in our ready-to-wear stores. Should we integrate this trend into our wardrobe ? How to wear this lingerie as outerwear ? Here are some tips if you want to surf this fashion.

It was in the 1980s that the fashion for “lingerie as outerwear” (lingerie as a piece to wear outside) appeared. It is notably with the looks of Jean Paul Gaultier for Madonna with its iconic corsets and conical bras.

People around 30 yo will also remember the very daring clips of Britney Spears “Slave 4 u” or Christina Aguilera in “Dirrty” where the thong was worn on the pants.

Since then, the trend has evolved towards a chic, subtle or even completely lay back style. We see more and more corsets or silk camisoles being worn as a top. The lingerie shows itself for a touch of glamor. 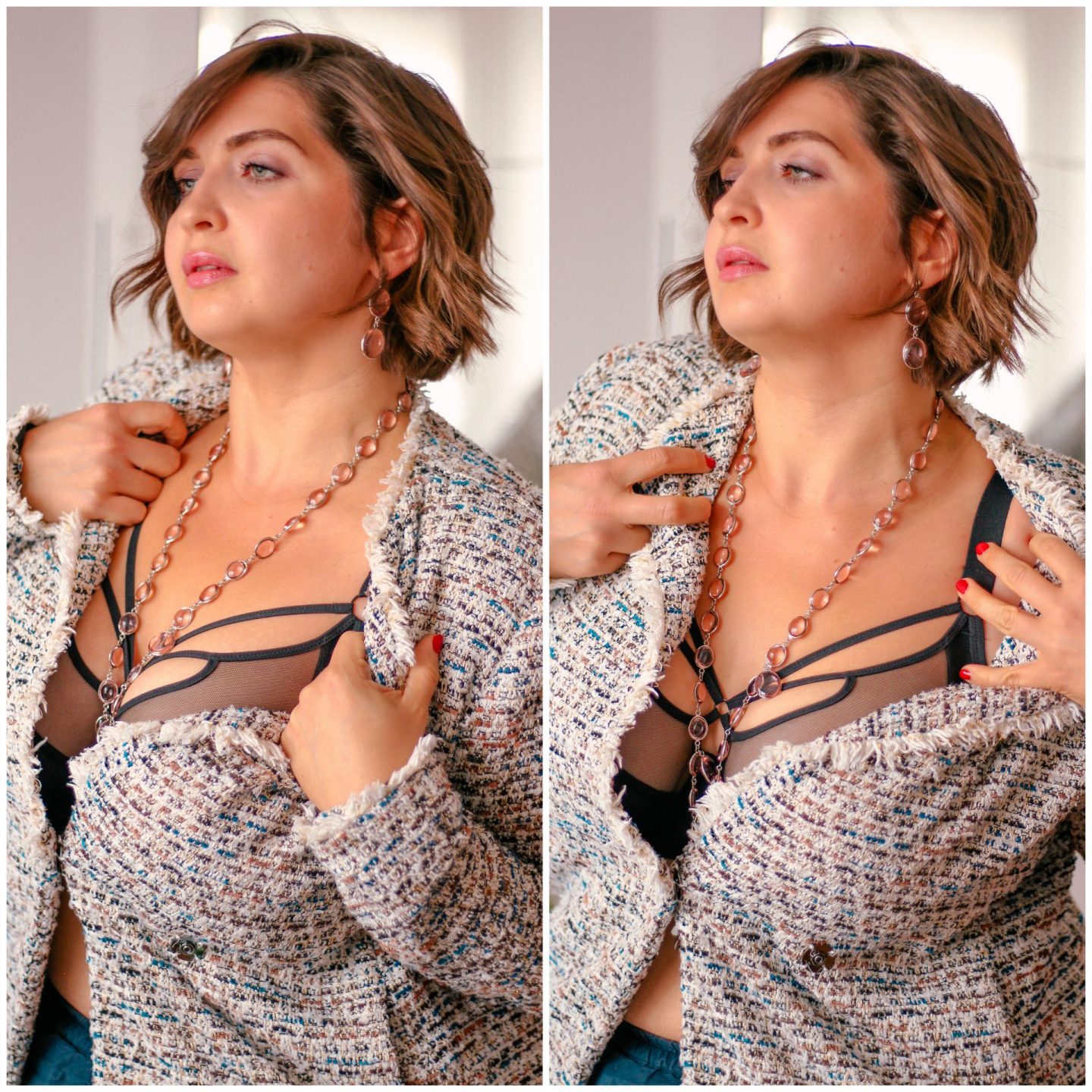 Lingerie as outerwear : which pieces to wear ?

Apparent lingerie involves more pieces of lingerie dressing the upper body than the bottom. No, this trend does not invite you to let your thong protrude from your pants as it was fashionable in the 2000s. It invites more to integrate certain pieces such as bras, bustiers, etc. to our day or evening outfits, to bring a touch of femininity and sensuality. We then let glimpse a pretty lace or, why not, a delicate double strap.

It is therefore more a question of showing lingerie at the level of the curve of the shoulder or at the level of the chest. However, last year appeared on the catwalks – especially at Dior, very pretty skirts – ankle length, quite transparent in tulle or gas. These skirts therefore give a glimpse of panties that want to be low-cut but not too much. We also got to see Prada pulling out super sexy fringe skirts which makes underwear hint at every step.

In terms of pieces that you can integrate into your wardrobe : bras with pretty straps – even double straps, bustiers or bodysuits that replace your top under a fairly structured jacket (or blazer to play on the codes of the male wardrobe), a black or colored lace under a white or transparent blouse, kimono and other silky negligee can be worn as a light jacket, etc.

The goal is to have fun with lingerie and above all to let glimpse an aspect of your personality, of who you are in your look. 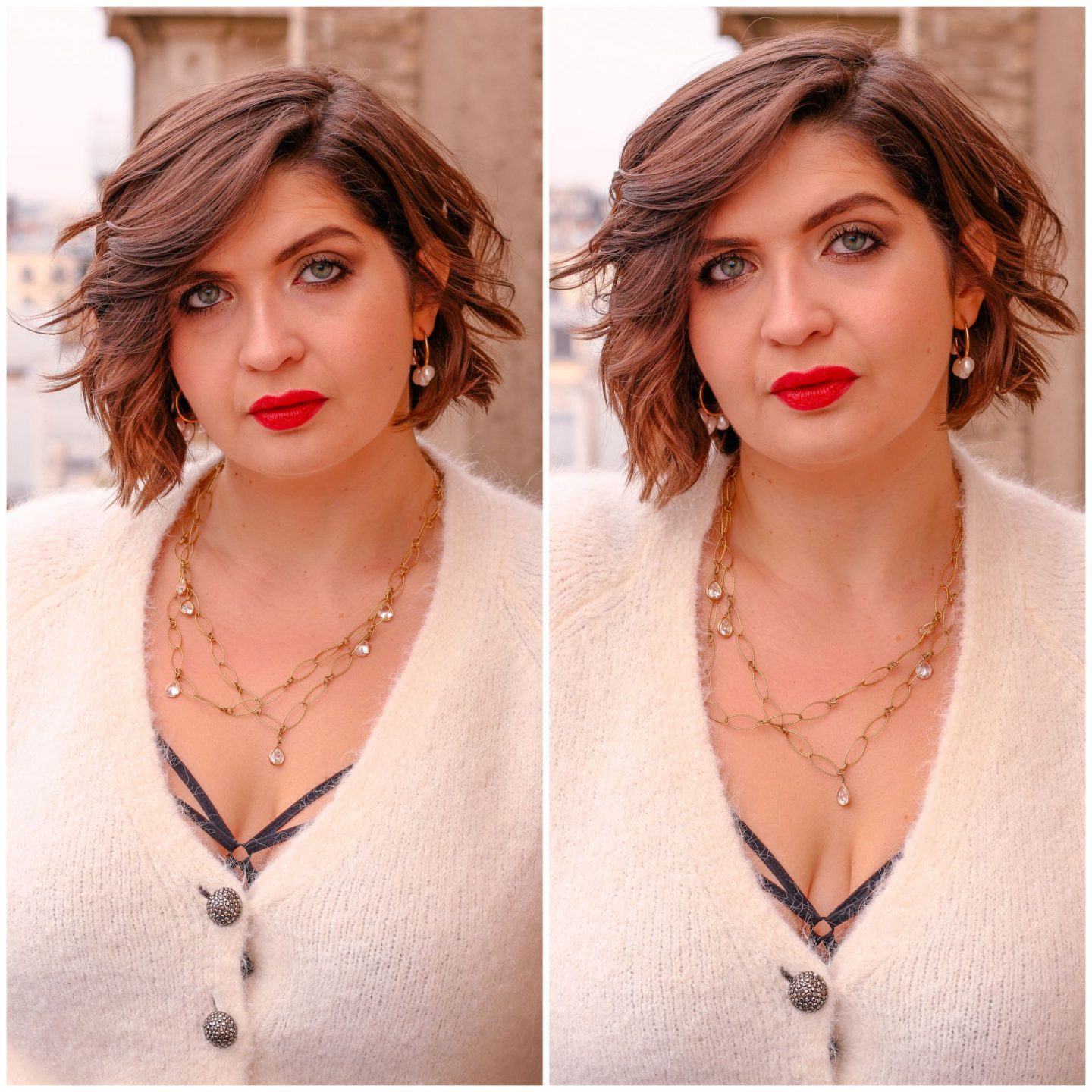 Strapping bras or lingerie and bralettes (brassieres) are the big trend of recent months. With the bralettes, the underwears show themselves. Depending on your breast size, either the bralette looks like a crop top style or, if like me, you have a generous bust, bet on the more subtle side of a transparent blouse to let your bralette glimpse. Usually, what is problematic in society is the female nipple…So it’s up to you to see which part makes you most powerful and comfortable.

In the few photos that I’m sharing with you, I am wearing the Sachi model of Elomi who is a model that I adore. Besides the work of the straps which I love, it is super comfortable. Generally, I wear it with large V necklines so that the straps are visible : the goal is to suggest the neckline and to sublimate it. For example, I wear it with a rather fluffy cardigan – which breaks up the slightly “cosy” vibe of the look with a touch of sexy. It also helps bring a structural element to the eye as I wear something a little fuzzy around the body. I also like to wear this model under a jacket that is worn a bit like a wrap jacket. It prevents me from adding a layer below and also having fun with my cleavage.

To see Elomi’s Charley bralette in action, I invite you to find some photos with a transparent black blouse here.