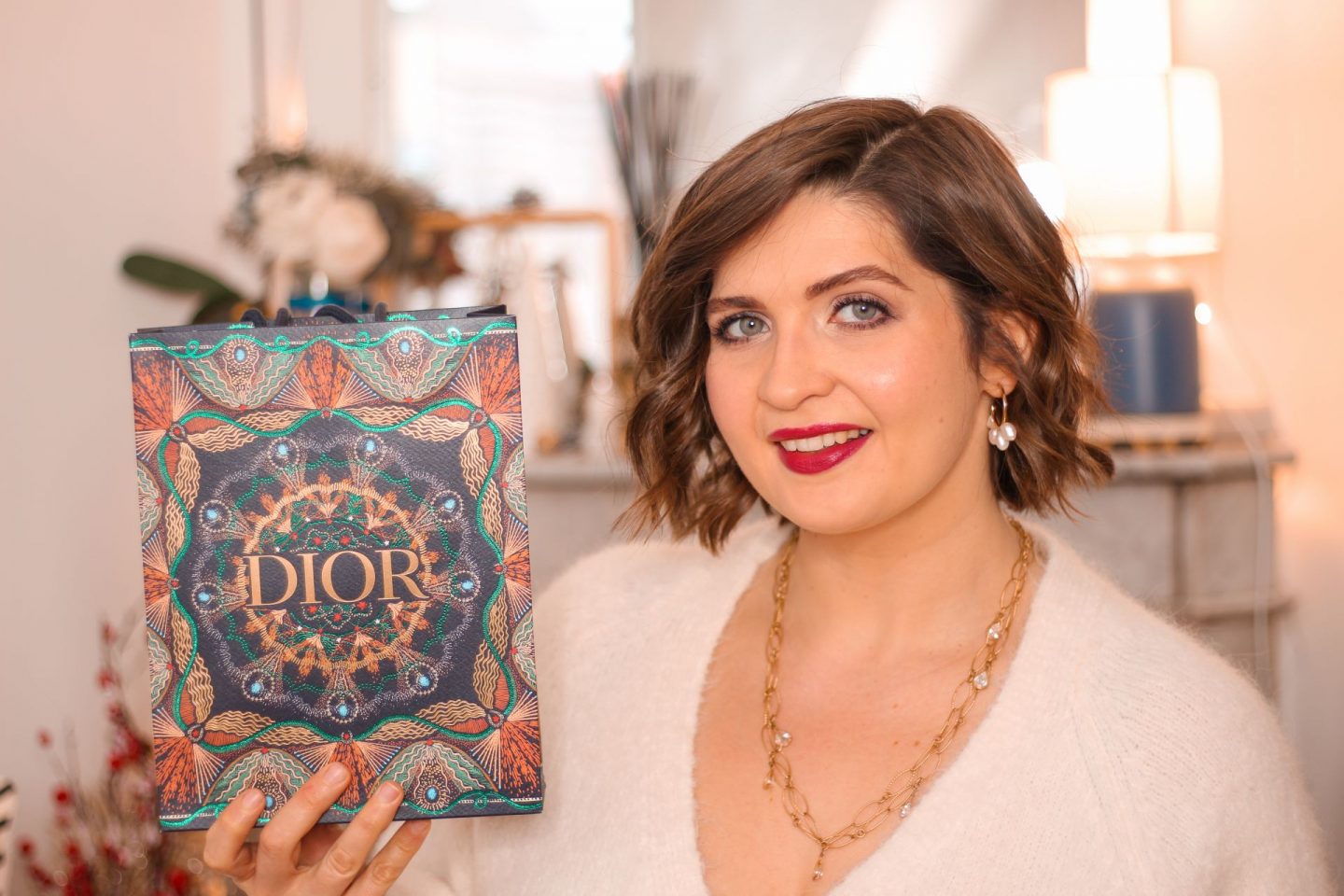 Under the Christmas tree, I (finally) opened my birthday present – confined birthday if you remember my dedicated blogpost ! I had wanted a Dior leather goods item for a while and in this article, I will present what I chose : the Dior Lotus Saddle Wallet.

It was in 1999 that the Saddle Dior bag, inspired by the equestrian world, appeared for the first time. Its graphic design can be seen by its asymmetrical flap reminiscent of a saddle, its magnetic “D” stirrup clasp and its handle enhanced with the “CD” signature on each side.

When it was released, the Saddle bag stirred the crowds. He had followers as well as “detractors”. However, since Maria Grazia Chiuri is at the head of the artistic direction of the Women’s collections at Dior, the Saddle bag has experienced a new moment of glory. Maria Grazia is fascinated by this accessory which she declares as easy to wear as a shirt or jacket, functional and adapted to the challenges of everyday life. The designer therefore strives to restore it to its nobility by imagining it in a wide choice of colors and patterns.

Over the seasons, the artistic director has made this piece of leather goods a blank canvas to give free rein to her imagination and creativity. The Dior Saddle bag is thus available in a minimalist and timeless style in grained or ultramat calfskin, shiny goatskin, velvet or satin. In its more daring versions, it is also covered with the emblematic Dior Oblique motif, the iconic Toile de Jouy, embroidery, pearls, sheepskin, multicolored prints, embroidered denim…In short, there are no limits in the variations of the Saddle bag which has become one of the essential pieces of the Maria Grazia collections.

Personalization goes further with the various shoulder straps sublimated with the “Christian Dior” signature, which the House offers separately. The line is also enriched with chain or removable belt pouches, wallets, card holders and phone cases for a trendy coordinated style. 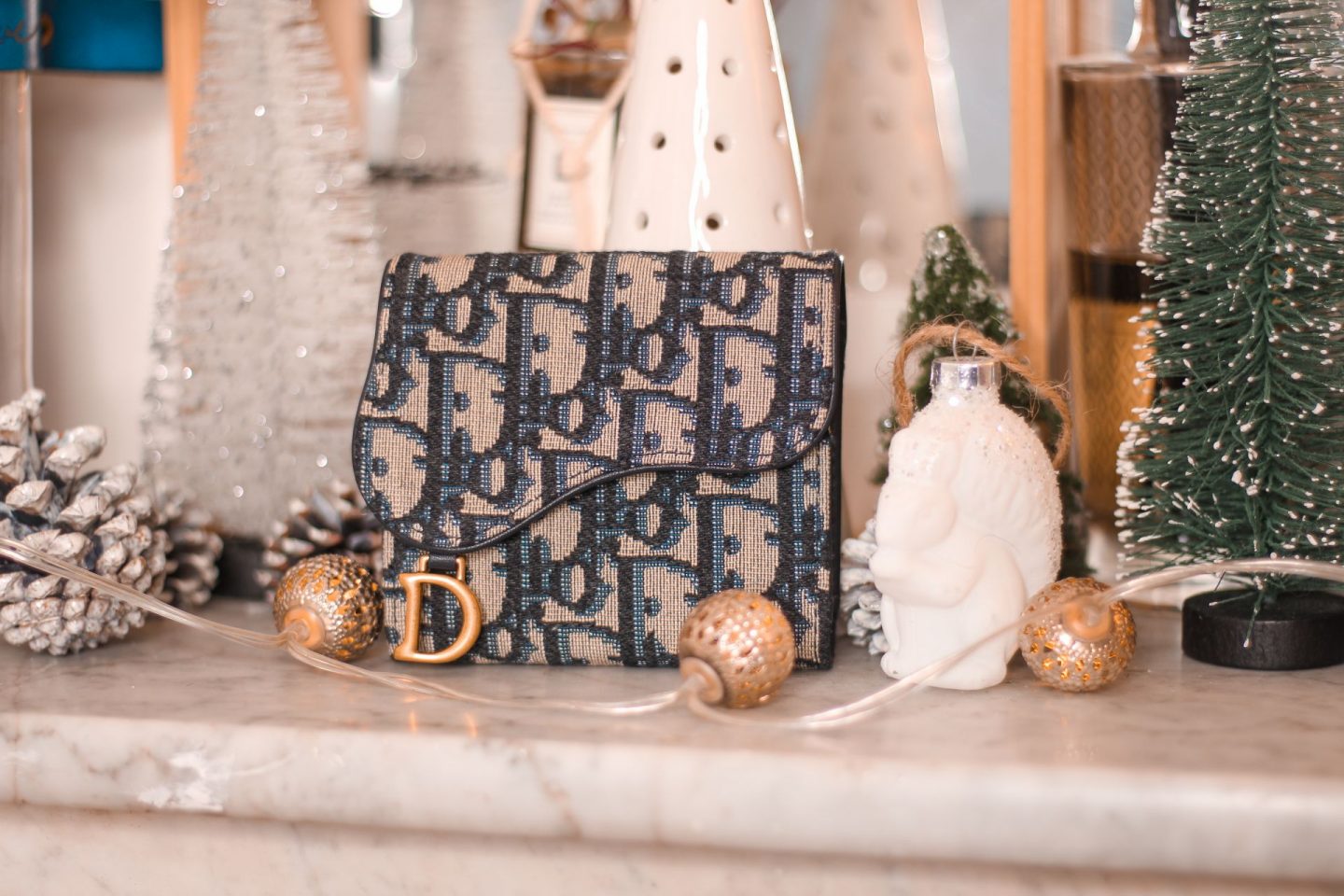 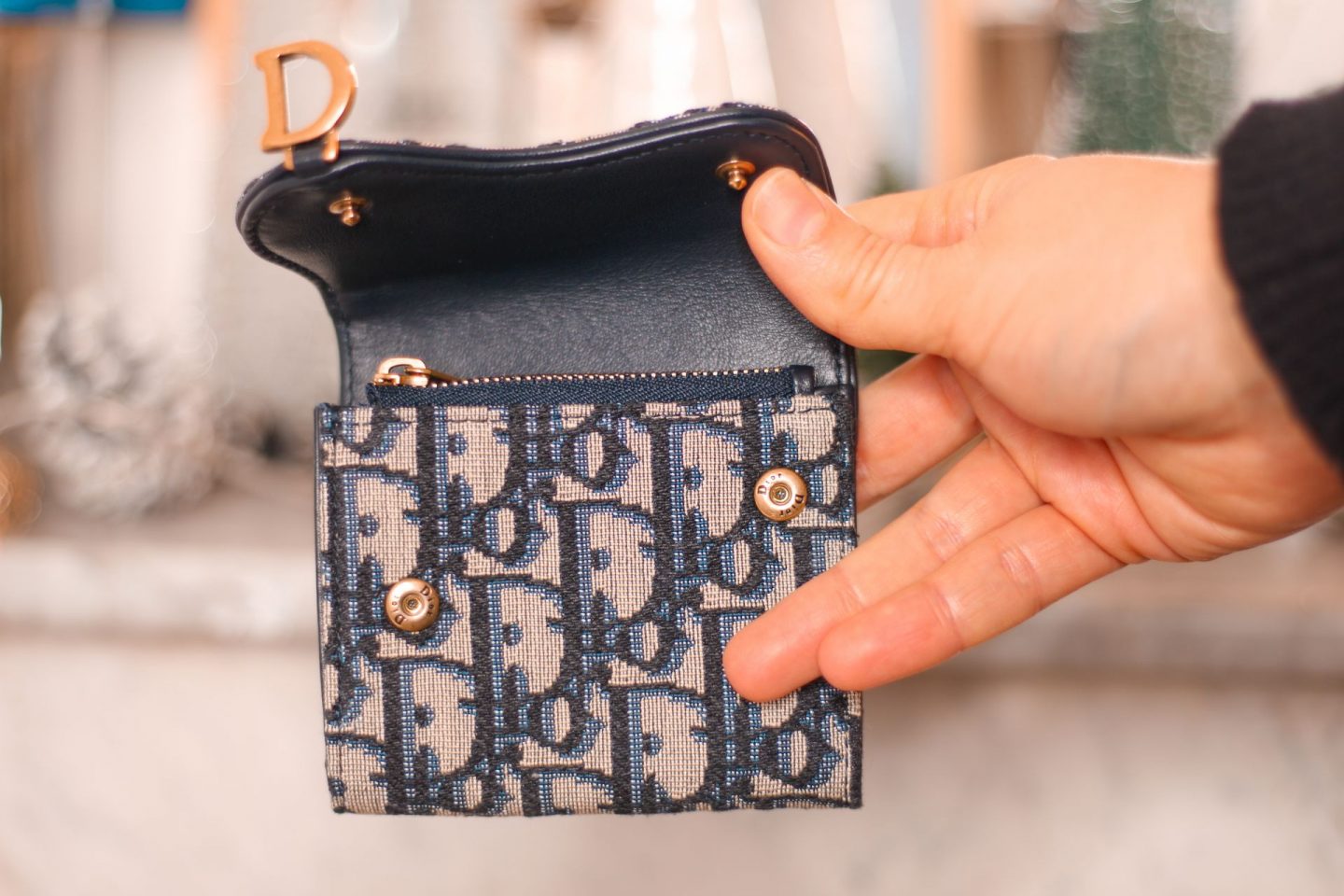 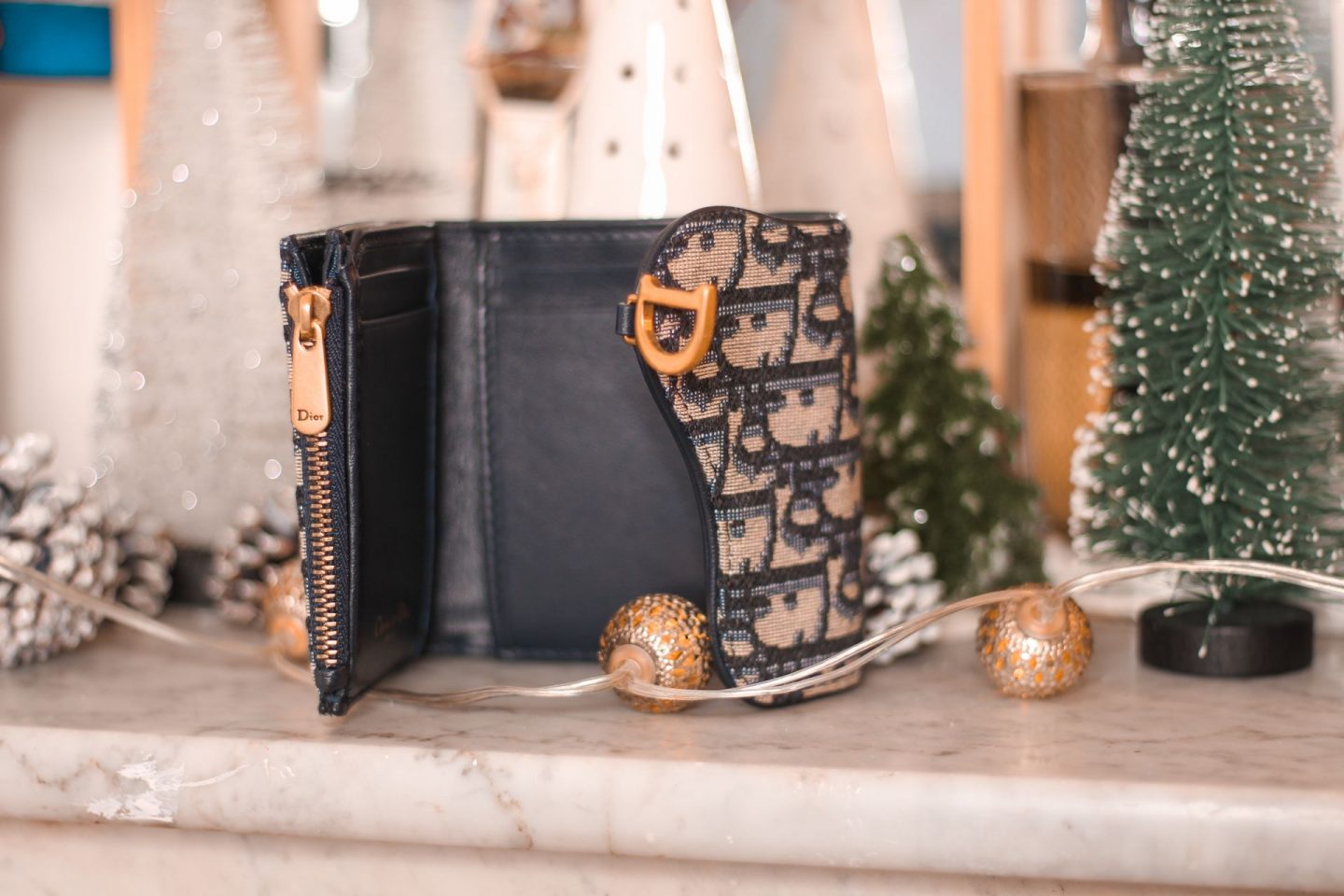 The Lotus Saddle Dior wallet is a compact and functional model. It incorporates the fetish elements of Maison Dior with its Dior Oblique jacquard canvas and its asymmetrical flap adorned with a metallic insert (D in aged gold metal). It’s roomy enough to hold essentials and slip into a small bag or clutch. The interior is in smooth navy blue leather with the Christian Dior Paris inscription in gold.

Its dimensions make it the perfect everyday companion (W 11 cm x H 8.5 cm x D 3 cm). Inside you have 4 card slots (2 x 2) behind which you have two slots to slip additional cards or documents, a zipped pocket for cash, a bill compartment, a flat pocket at the back. ‘outside. In summary, this model is equipped with the necessary to perform the functions of a wallet.

Iconic in its blue jacquard canvas, it also exists in various leather variations (grained, ultra mat). However, my choice fell on the monogram canvas – which seemed to me to be the most resistant option in the long term.

The Lotus Saddle wallet retails for €440.

My opinion on the Saddle wallet

After reflection, it is the model that seemed to me the most ergonomic, easy to use on a daily basis and above all iconic of the Dior house with its jacquard canvas. Its size allows me to slip it into all my bags which are quite compact. I was able to put my essentials there without difficulty.

As much as the Saddle handbag does not particularly attract me, the wallet version brings a touch of originality by its shape.

Since Christmas I have slipped my new wallet into my purse and I really enjoy carrying it with me. I really like the texture of the jacquard canvas – which makes it resistant and at the same time typical of the Dior house – without being too “ostentatious” for people who opt for discreet luxury pieces. 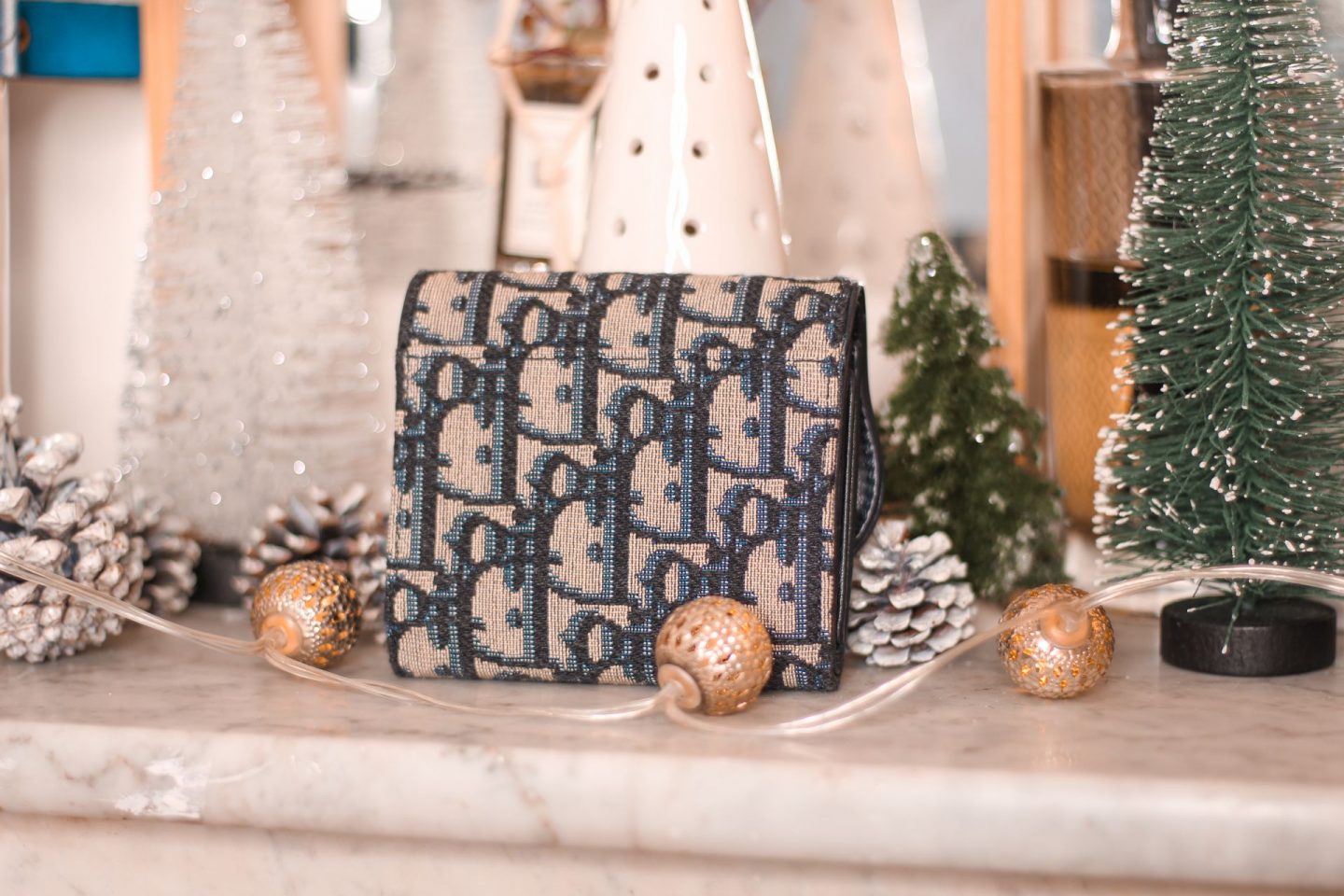